I know, it's been a while. Once again, the working world has caught up to me and The Blogging has suffered. I've got a few things I've been meaning to talk about here -- including my noodling around for a couple of weeks building a Harry Potter hack using FATE ACCELERATED -- but let's get back to business with a little review.

For those of us who like storygames, even in a passing way, a new Jason Morningstar game is a big deal. If his name doesn't refresh your Fate points, we're talking about the designer who brought the world FIASCO (and other excellent games like GREY RANKS and THE SHAB-AL-HIRI ROACH).

When I heard that Jason was working on a new game using the Apocalypse World engine, I was pretty darned excited. If ever there was a peanut-butter-and-chocolate style Team Up Destined to Rock the World, it was Jason Morningstar and this game system. Here, the system has been applied to a high concept that is very tightly focused: a Russian squadron of all-female bomber pilots in World War II, battling the Nazis with poorly-armed, obsolete biplanes, and battling systemic sexism and repression from their own army.

The 588th Night Bomber Division was a very real thing, by the way -- though their story is not widely known. These amazing women flew 1100 consecutive nights of combat in a campaign of harassment against the German army. They were never intended to do serious harm to the enemy, only keep them on edge -- thus the sinister sobriquet they were given: Nachthexen -- "Night Witches". 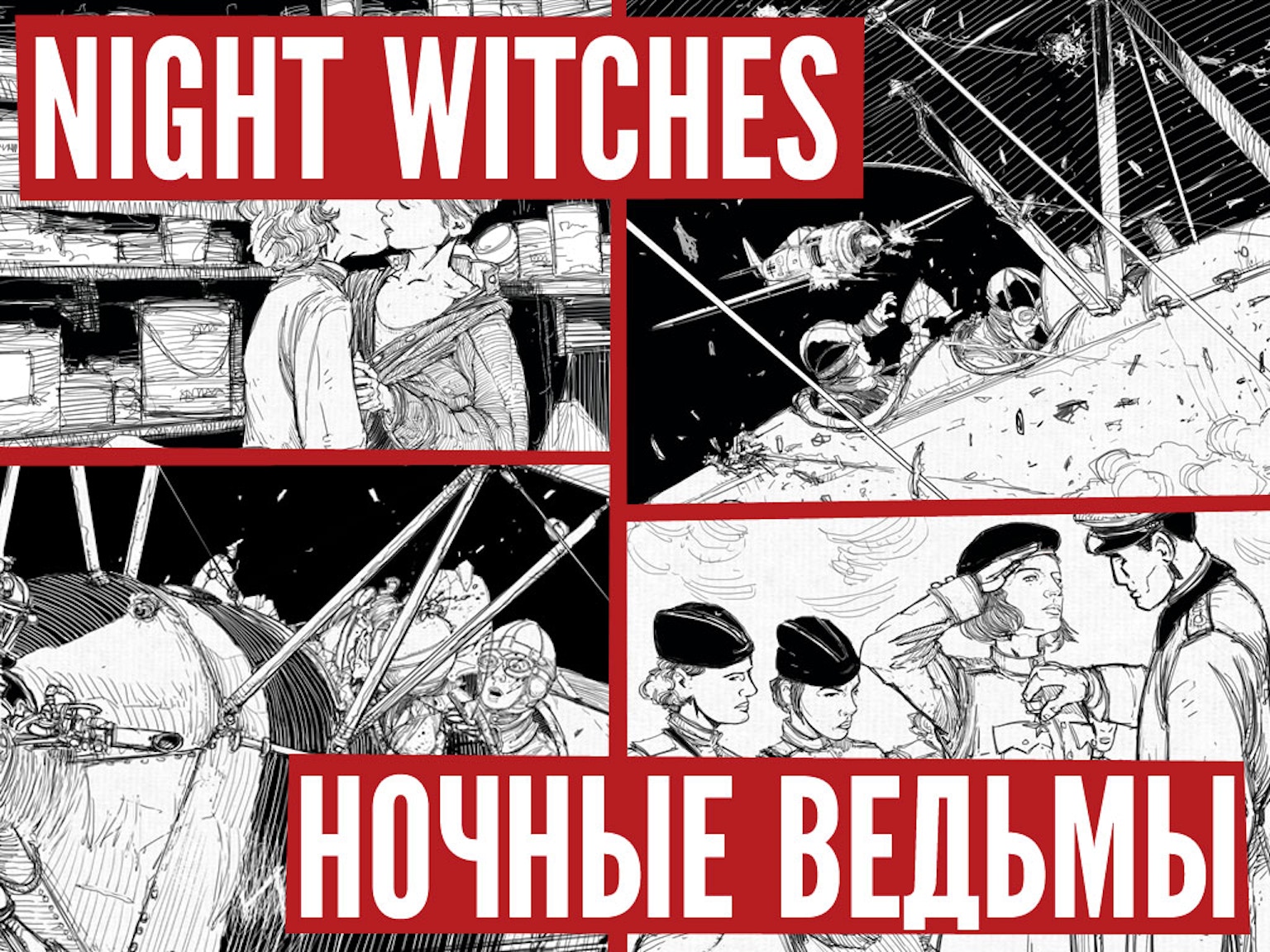 So what does NIGHT WITCHES bring to the *World party?

Firstly, it skews toward the gritty end of the *World spectrum. Characters are expected to be seriously injured and removed from play for some time, or even killed, on a regular basis. This is appropriate for such a high-stakes WWII milieu, but could have been a barrier to long-term play. Jason Morningstar has come up with an elegant solution to this issue, however: he has built into the game the expectation that the GM role will change over the course of play, probably on a regular basis. If your character is killed or hospitalized, you take over the "Big Chair" for a while and the current GM rotates in as a fresh-faced new pilot. Everyone is expected to play and GM over the course of a long-term game, and tools are provided to make jumping into the GM role very easy. Proceeding in this way, a group could easily play through an entire historical campaign, taking the 588th from training all the way to the end of the war. If you're lucky enough to survive missions by the skin of your teeth, there is also the option to switch GMs as part of character advancement or changing Duty Stations.

Play is divided into two segments: Day and Night. Night, of course, focuses on flying high risk bomber missions, and that's where things can get dangerous very quickly. Day has its own risks, as the squadron deals with interpersonal conflicts, romance, NKVD agents who want to expose you as traitors to the revolution, sexist Russian military officers, and all the behind-the-scenes wrangling that keeps the squadron in the air. Short of aircraft parts? Maybe you have to steal them, or find something to trade. Out of munitions? You have to find something else to drop on the Germans. Actions during the Day help build up a Mission Pool that can help you succeed during your nightly duties. If you do too much during the day, however, you're going to be exhausted going into battle, and that can be deadly giving the ceaseless grind of nightly missions.

Every player must play a female bomber pilot in the 588th (and why wouldn't you want that, when they're so awesome?). There's no room to play a male mechanic here -- everyone at every level of the 588th was female. And really, that's what this game is about: being a woman in wartime. NIGHT WITCHES does for gender, I think, what MONSTERHEARTS does for sexuality: it forces players to deal with gender issues that are maybe unpleasant or uncomfortable to grapple with. (Aside: SAGAS OF THE ICELANDERS also deals with gender, and in interesting ways, but I think NIGHT WITCHES comes at it from a different angle that makes it particularly potent. Aside Two: There is a possibility raised in the rules that you could play a male character under one condition -- you're a male passing for female, which is a whole different kettle of fish. That's interesting, but there's not a whole lot of support for it here. I'm not sure I'd want that in my game. I'm good with it strictly focusing around women and the things women fight against every day.)

There are a few other new things in NIGHT WITCHES for *World veterans. Each playbook keeps track of Marks -- these are the psychological scars that war inflicts on your brave bomber pilots as they battle through their exhausting daily grind. You can highlight the character receiving a new Mark by playing out a Flashback scene or perhaps by "writing a letter home" where you explain the tragedy that has just unfolded. Sometimes this takes the form of your character telling a Story about some important, harrowing event in your life. Interestingly, this need not necessarily be an accurate representation, but can be filled with the same unreliable details that human memory is prone to.

The other new angle here is Regard. This is a representation of something your character has emotionally invested in -- it could be a beloved plane that's taken you through German fire so many times it's become a lucky charm, or a comrade in arms, a lover, or even an enemy or rival. Regard can help you succeed, giving you a bonus when you most need it, but it comes with a heavy price tag. If the object of your regard is ever killed or destroyed, you take Harm immediately.

Overall, this is an astoundingly good game packed with terrific content. The resources provided for the GMs gives everything you need to fly missions from a handful of duty stations with very little preparation required. I think the everyone-GMs, everyone-plays model is really interesting, and I've wanted to see what a rotating GM game might look like for a long time. The subject matter of this game is exciting and packed with possibilities for HTHD play. This is the best thing I've read in a long while, and that's saying something -- there have been a lot of terrific games coming out lately. Indeed, there have been a lot of *World games too. The fact that NIGHT WITCHES stands out so strongly tells you just how great it is. This could be the game of 2015, gang.